Find Dehus Dolmen by travelling east from L’Ancresse  turn left into the road just in front of Sarnia Controls. Or, travel north from Bordeaux Harbour for about a quarter of a mile and look out for the sign on the lamp post on the right at the first corner. The site is about 150m on the left. There is parking for one car to the right of the mound. Open 9am until sunset. Free admission. Perry’s Guide Ref: 7 H4

Le Déhus (also known as Dehus Dolmen) is easily the most impressive passage grave in the island as it features the world famous ‘Le Gardien du Tombeau’ carving on the underside of one of the capstones. The tomb, covered by a grassy mound and edged by a circle of standing stones (some original), can be accessed from the road through a small gate.

Dehus Dolmen was purchased by Jean de Havilland for the equivalent of £4.05 from Jean Hubert, the tomb was later acquired for the island by the States of Guernsey and has been excavated at least four times, firstly by F. C. Lukis over a ten year period from 1837-1847, by the Rev. Lee in 1898, Lieut.Col. de Guérin in 1915 and Miss V.C.C. Collum in 1932.

There is a ‘supporting’ pillar under the engraved capstone, rarely found in passage graves where the capstones seem to have been selected for their strength and size and so do not need supports. Unfortunately, the pillar does not contact with the capstone so there’s a little mystery as to why it is there. There are also four side chambers but at least one of them has been re-constructed in error.

The passage tomb looks at first glance to be well preserved though much of this is down to rebuilding. It is very well lit and offers the visitor viewing of the carving on the capstone by switching lights to one that sends a beam across the carving bringing it to ‘life.’ The sun would have done this one certain days or times when it was upright. (If it was ever an upright stone).

During the ten year investigation by F. C. Lukis the second capstone (yes that one) was broken and resting down on the bones and vases on the floor of the chamber. The poor man missed this quite exciting find. The stone was replaced by Capt. F. de B. Lukis and the Rev. G. E. Lee in 1898 when the two pieces were ‘securely bound with wire rope.’ This work must have taken place in daylight and they did not notice the carving either. The carving wasn’t spotted until Lieut. Col T. W. M. De Guérin had a really good look in 1917. In the Transactions of Le Société Guernesiaise of 1917 (p.52 Vol. VIII Pt.1) De Guérin notes sculptured details that he suggests amount to four ‘lines.’ He noted that they appear on both parts of the stone suggesting carving before it was broken, if not before it was placed on the outside supports. (The internal ‘support’ may have been lowered during the re-excavation in 1932 to facilitate viewing of the capstone). The lines he found are part of the bow.

The carving is always lauded as being a unique example of prehistoric tomb art but due to the advent of digital photography, the internet and a spreading re-interest in this subject, it is quite simple to search for the phrase ‘sculptured capstone’ and compile yourself a long list of new discoveries, many of these at sites in France. That being said, the carvings are usually female. This one, so far, is unique in having a beard. The image clearly shows the face, hand, bow etc. and I photographed it in nine sections on several occasions and the resulting images have been fitted together digitally. This is the first large scale image readily available and I hope you will enjoy making your own interpretation of the carving. I could never see the fingers and other attributes in the early drawings but they are very clear here. You may also note that the carving in the face seems to be much heavier than the rest and has some kind of head dress. This may have been carved earlier as a Mother Goddess statue-menhir with the other carvings added when it was re-used as a capstone. But hey – visit it yourself if you can and make up your own theories!

(Could this be an extremely early interpretation of the Orion constellation?) 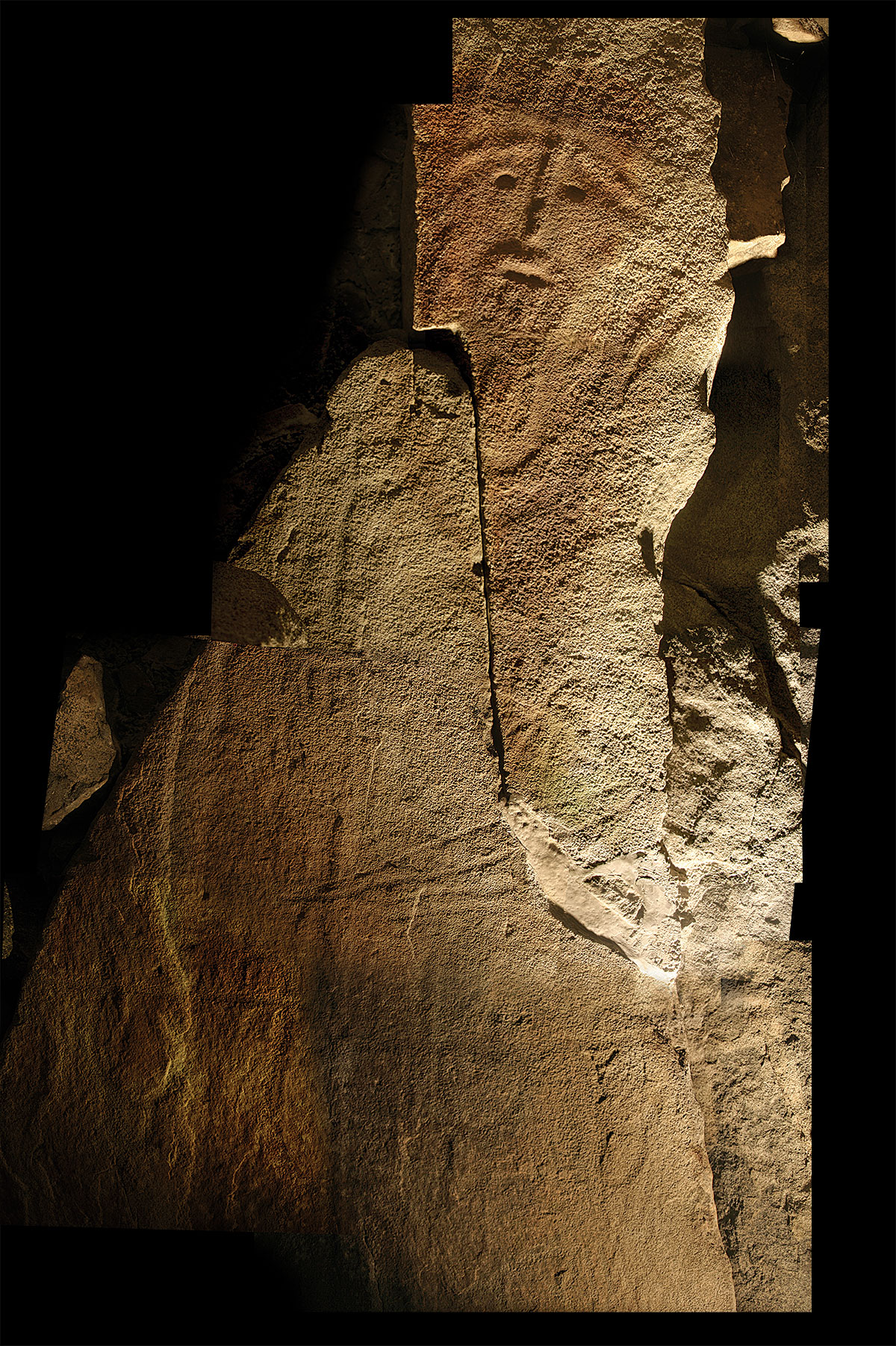 In the right hand chamber as you enter this man-made ‘cave’, a gruesome discovery was made by F. C. Lukis – two male skeletons alongside each other but facing in opposite directions upright with bent knees and kept in place by ground and a large amount of limpet shells. The shells no doubt helped preserve the bone in the acidic soil. Heaven knows what we would find if all the bodies had been preserved. Was this a ritual burial, were they really buried alive as was suggested by Lukis and then related parrot fashion in all the old Guernsey history books?

On the first excavation a three feet thick layer of limpet shells was found. Was this a pile of offerings for the afterlife or votive gifts to the dead loved ones? Certainly the limpet was eaten in huge numbers by early man – the numbers had to be huge as the nutritional value isn’t that high in a limpet – so maybe this was only a few weeks supply or maybe more got added over a period of months or years. The shells might just be there to stop the bones rotting.